Why Puerto Rico’s voting patterns shifts are good for democracy

“Like it or not, this election has marked a milestone in Puerto Rican political culture and electoral processes”.

Editor’s Note: It’s been three months since Puerto Ricans cast their ballots and voted for the most diverse legislature in Puerto Rican history. At 9 Millones we waited to publish this story in order to get the full picture of the electoral data. Although much attention has been paid to the government mismanagement of the count, we want to focus on what the results say about the way people vote and how non-partisan organizations educated the electorate.

Laura Lopategui came to the voter booth prepared with a list of the candidates she wanted to vote for. The retired teacher boycotted the elections in 2016 because she was “disgusted” but said this year was different:

She explained how she carefully researched the candidates online and voted by candidacy. Lopategui represents a significant trend in the electorate: a demise of partisan politics and rise of voting by candidates, especially in the Legislative ballot.

An analysis of the election results by 9 Millones shows that the vote by candidacy in the Legislative ballot increased by 3.77% from 2016. At the same time, the straight-party voting decreased by 4.48%. Although a small percentage, when you look at the historical data it becomes clear that the Puerto Rican electorate is changing the way it votes. According to historical data from the State Elections Commission (CEE according to its Spanish acronym), in 2008, 83.14% of the voters cast a straight-party vote in the legislative ballot and 5.80% voted by candidacy. Meaning that in 12 years (4 election cycles) the vote by candidacy has increased by 20%. Yet, years of corruption scandals, financial mismanagement, inadequate response to natural events, and the ousting of Ricardo Roselló have caused many to evaluate candidates individually.

“This time I decided to vote by candidacy and not under any party”, said Ángel Lebrón after casting his vote. “Politics needs to change”, added the 38-year-old.

Amid rising interest from the electorate, a non-partisan, civil movement began to organically form in order to educate and mobilize the electorate. Social media platforms like Política Accessible (which means Accessible Politics in English) had live Instagram interviews with congressional candidates, nonprofits like Mentes Puertoriqueñas en Acción hosted debates, and outlets like La Clara prompted people to register with a “Guide for getting your voter card”.

The American Civil Liberties Union (ACLU) in Puerto Rico started approaching community groups and politicians alike in April 2019. According to a document about their methodology. They surveyed over 800 people from August to October of 2019, to assess which legislative measures and issues were of interest to the public.

With this information, they eventually launched a campaign called #Tuvotonosedeja which shared the candidate’s legislative record or their positions in topics such as reproductive rights, LGBTQIIA+ rights, transparency, environmental issues, and more. They posted infographics on Twitter, Facebook, and Instagram of municipal and legislative candidates.

“We are thrilled that we started a dialogue with the people that follow us on social media because they’re asking a lot of questions,” said Mayte Bayolo Alonso, a lawyer for the ACLU who headed the campaign.

Initially, they were going to have in-person get-out-the-vote events but when Puerto Rico became one of the first jurisdictions to declare a lockdown because of the pandemic, their efforts stayed virtual.

They also created a flyer that people could print and hand-out within their communities.

For Bayolo the increase of votes by candidate shows that people were more intentional in getting to know each individual candidate in their legislative ballot.

“I think it’s a positive change in the sense that it shows that one, people in fact were listening and two that people studied and educated themselves to know who to vote for,” she added.

Getting people to practice their vote

Efforts to practice the ballot saw high volumes of users.

For example, practicatuvoto.com, a platform that has been available to practice the vote saw its users double compared to the 2016 elections. In 2020, the website received 465,340 total users and 841,834 practice sessions.

“What we’re seeing is that with each election, people in Puerto Rico want more opportunities to learn and have control over their vote,” said software engineer Carlos J. Vélez Álvarez who has been leading practicatuvoto.com as a volunteer since 2008.

The platform hasn’t changed much since its origins. Vélez Álvarez created a program that extracts the names and positions of the CEE PDFs and each year they update the ballots once they’re published. He says the support of the press has been instrumental for their success and getting people to the platform.

Vélez Álvarez welcomes new initiatives and was in communication with the emerging platform paravotar.org/practice, a portal that allowed voters to practice their vote and access other information like their nearest voting center. By Election Day, the page had received 407,000 website visits and the tool to practice the vote was used 217, 674 times.

One of their main motivators for the platform was to show people the alternatives to straight-party voting, according to Layshi Curbelo, UX designer and spokesperson for paravotar.org.

“We know ballots are designed for straight-party voting because it’s the easiest way, but we want to explain that there are other ways to cast your ballot that are available and easy to do. You simply have to practice them,” she emphasized before the elections.

Paravotar.org was an initiative under the umbrella of Code4PuertoRico, a non-profit made up of programmers and designers. Curbelo alongside Emmanuel Luciano Bernal and José Padilla Malavé created the website voluntarily without any compensation.

The Electoral Code was passed solely with the votes of the pro-statehood party and did not have the support of civic organizations or citizens. Schatz and other members of the party emphasized the straight party vote throughout his reelection campaign. The most diverse Congress ever

The attention that all of these platforms gave to the Legislative branch paid off. According to data from the CEE, more people voted in the legislative ballot than the state ballot during the 2020 election.

A survey conducted by 9 Millones during the first week of November revealed that, in general, Puerto Ricans trust the Legislature less than any other branch of government. The respondents (439 people) trust their mayors more (33.9% trust their decisions “always” or “most of the time”) than the federal government (31.9%), the governor ( 24.4%), or the legislature (17.5%). 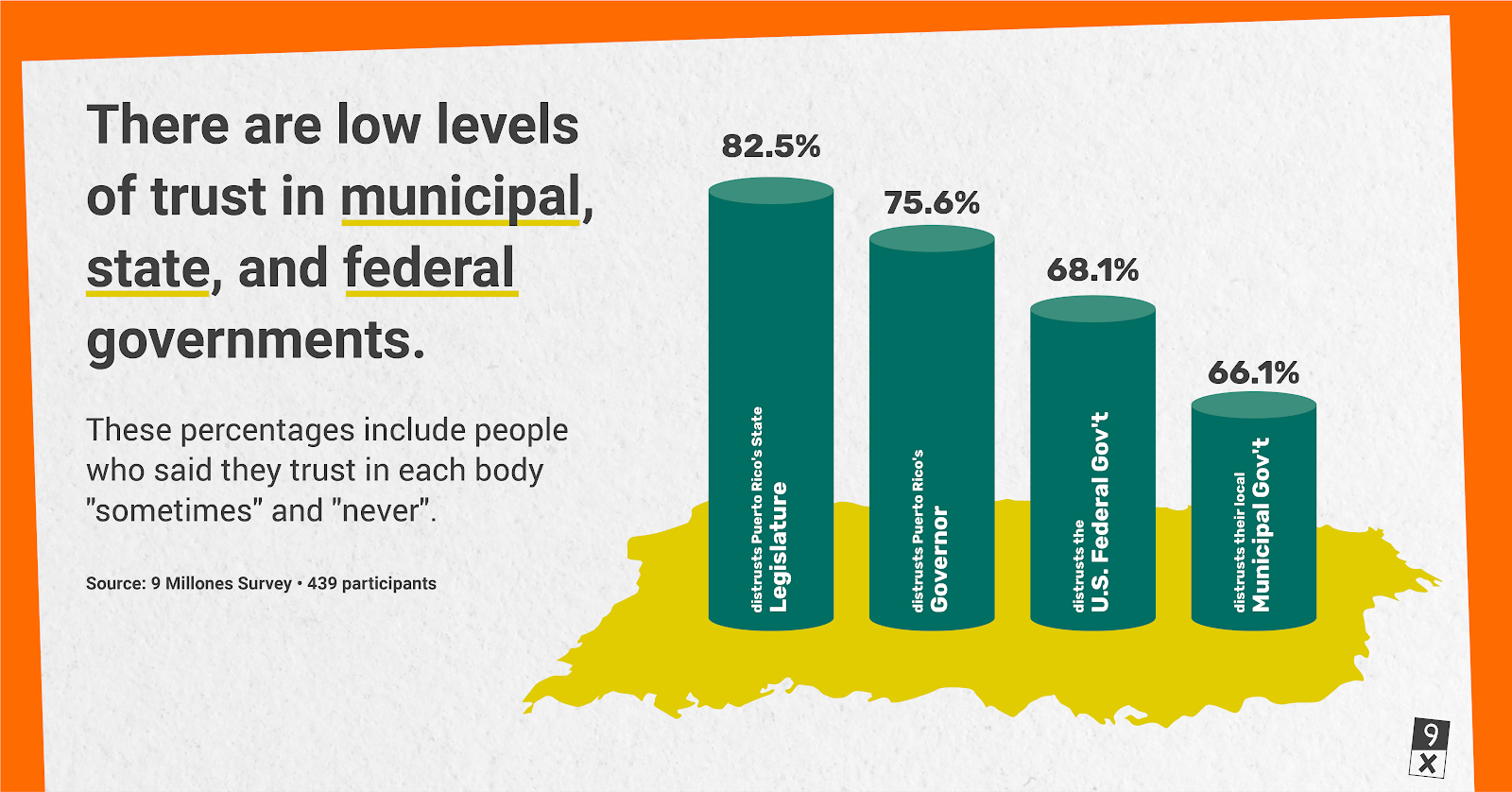 Download 9 Millones Survey Results
Even though the PPD and PNP are still dominating politics, both parties received less than 35% of the votes in the governor’s race. While in the Puerto Rican Senate, there is no clear majority because of five members: two from the emerging Movimiento Victoria Ciudadana (MVC), one from the Independent Puerto Rico party (PIP), one from Proyecto Dignidad (PD), and one independent candidate.
“There is certainly a change in the electoral conduct in Puerto Rico”, said Luz del Alba Acevedo, a political science professor at the University of Puerto Rico in Río Piedras.

Acevedo says that “the diversity is simply extraordinary” highlighting the rise of women, LGBTQI+, and young elected officials. “It’s a diversity we’ve never seen before”, she added that there are representatives from all spectrums including religious conservatives.

Acevedo referred to these changes as a breath of fresh air for our democratic processes.

“This inherent richness in the diversity is a great benefit [for our democracy] because it contributes to our awareness and exposes us to a different debate, a debate where we hear the same problem from a multiplicity of perspectives.”

An example of this has already been witnessed. Before the Senate approved a measure to declare a state of emergency because of gender-based violence, a debate sparked between lawmakers.

While conservative lawmaker Joanne Rodríguez Veve argued against it, Ana Irma Rivera Lassén and María de Lourdes Santiago rebuked her argument. The debate was covered widely and many shared their views on social media. Ultimately, the measure was passed with a majority of votes and the Governor declared a state of emergency.

“Like it or not, this election has marked a milestone in Puerto Rican political culture and electoral processes”, said Acevedo concluding that only time will tell if bipartisanship has truly ended in Puerto Rico.

Camille Padilla Dalmau wrote this article and Deborah Rodríguez contributed to the reporting.

This article is possible thanks to the support of the Solutions Journalism Network, a non-profit organization dedicated to rigorous and compelling reporting about responses to social problems.

If you wish to republish this piece, send an email to camille@9millones.com